Using our 365 Pin Code Applied Numerology model, we had a 75% success rate in the RWC 2019 Quarterfinals; the Boks won, Wales won, England won; our only judgement error being that we tipped Ireland to beat the All Blacks. Not once (and we got lots of flak for this from quite a few “in-the-know-rugby-people” who read our blogs and said we were delusional…) did we ever say that our analytics had New Zealand winning and we did clearly tick Japan to beat Scotland and make their first ever RWC Quarterfinal. This weekend’s RWC Semi-finals are done, and we scored 100%, with the Boks and England winning, exactly as we’d predicted 365 Pin Code wise. We now shift our focus and analysis to this coming weekend and our numbers have the Boks and Rassie Erasmus to Win RWC 2019 Final. This is in keeping with our original “Boks to Win” prediction made early on during the Rugby World Cup pool games.

Jake White didn’t seem to give the Boks much of a chance against Wales! 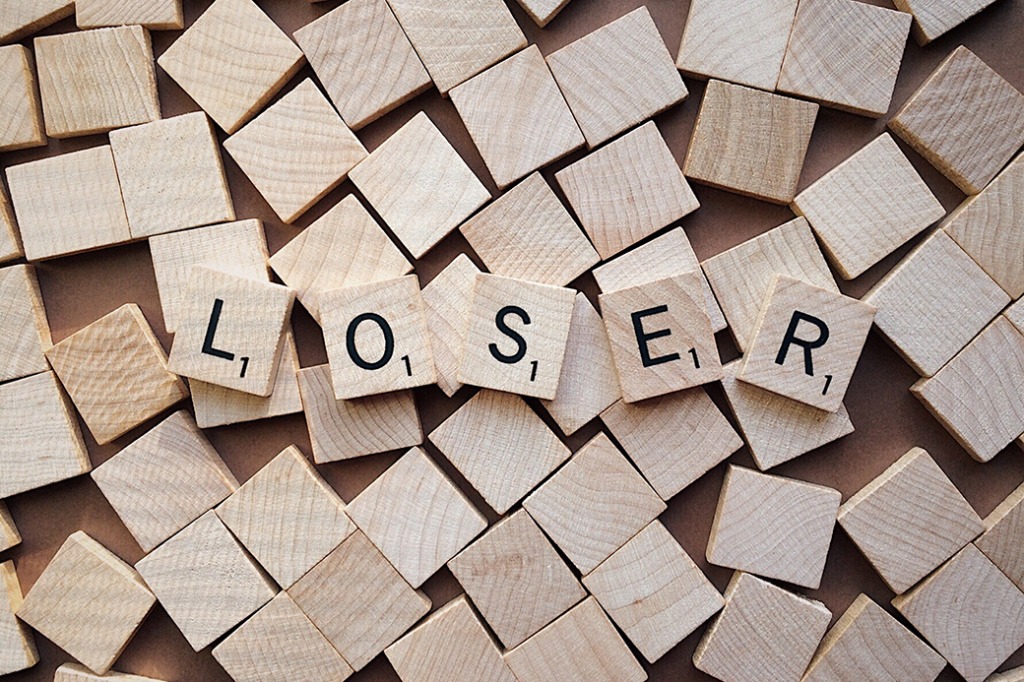 Gavin Rich writes: The smart money will be on South Africa edging Wales on Sunday to set up a repeat of the 1995 Rugby World Cup final, but there is something that should nag at all Springbok supporters – has the team been properly tested yet? Jake White, the coach of the 2007 World Cup winning team doesn’t think so, and much though some people might not like to hear it, he does have a point. Speaking to the Rugby World Cup website, White said he knew the Boks would feel they hadn’t been properly tested subsequent to their tournament opener in September and it would be a concern for them. “South Africa have had it easy so far. They will know that. They were always going to come second in their pool and then they got Japan,” said White.

White believes South Africa’s preferred quarterfinal opponents would have been France, who lost 20-19 in their encounter with Wales. And as White says, them coming through the pressure litmus test in Oita last week and still winning will give them the kind of momentum that such a win often does. “I am sure ‘Gats’ will have been giving it to Wales this week, telling them they were close to going home and they had better get it right this weekend,” said White. “The fact they were so pushed to beat France means they will get a massive amount of confidence from that. Looking at Dan Biggar’s body language when they won, the way he reacted and got the crowd going. That’s why I think Wales can do it. They’ve had South Africa’s number for a while. What I’d fear as a coach is that Wales weren’t great last weekend, but they got over the line. That means a lot when you are looking for momentum.”

But Jake White was oh so very wrong!

Given how the Boks won their semi-final against Wales, having to soak up extreme pressure from the get-go until they sealed the game in the 77th minute, Jake White was most definitely wrong, and he will no doubt be kicking himself that he did not bullishly back the Boks and Rassie Erasmus to Win RWC 2019 Final.

Eddie Jones’ 365 Pin Code Numerology profile for 2019 is superb, and Owen Farrell’s 365 Pin Code Numerology profile for 2019 is rock solid. Combine them and numerologically speaking, you have something very special going on. This is why we knew from the outset that England would feature in the RWC2019 Final. Lest we forget: England won the 2003 Final 20–17 to lift the Webb Ellis Cup for the first time, also becoming the first European side to win the cup. The scores were tied 14–14 at full time, and Jonny Wilkinson kicked a drop goal in the final minute of extra time to win the match. Owen Farrell has what it takes to win really big matches but not this time. The greatest strategic insights as to who will win on Saturday lie not with Eddie Jones’s numbers, nor Owen Farrell’s numbers nor Bok captain Siya Kolisi’s numbers (Kolisi has very good numbers in 2019 and he has had a storming RWC 2019), but within the numbers of Bok Head Coach Rassie Erasmus.

Through all the Applied Numerology assessments we’ve done throughout RWC 2019 we have been consistent with the prediction that it would be an England vs South Africa final, and much to our delight, it is. This proves the sniper-like accuracy of the Strategic Applied Numerology Research which we are doing and developing. We have also consistently mentioned that the Coach who had the best 365 Pin Code for 2019 was Rassie Erasmus and that the Captain who had the best 365 Pin Code for 2019 was Alun-Wyn Jones; no wonder it was such a hard-fought semi-final. 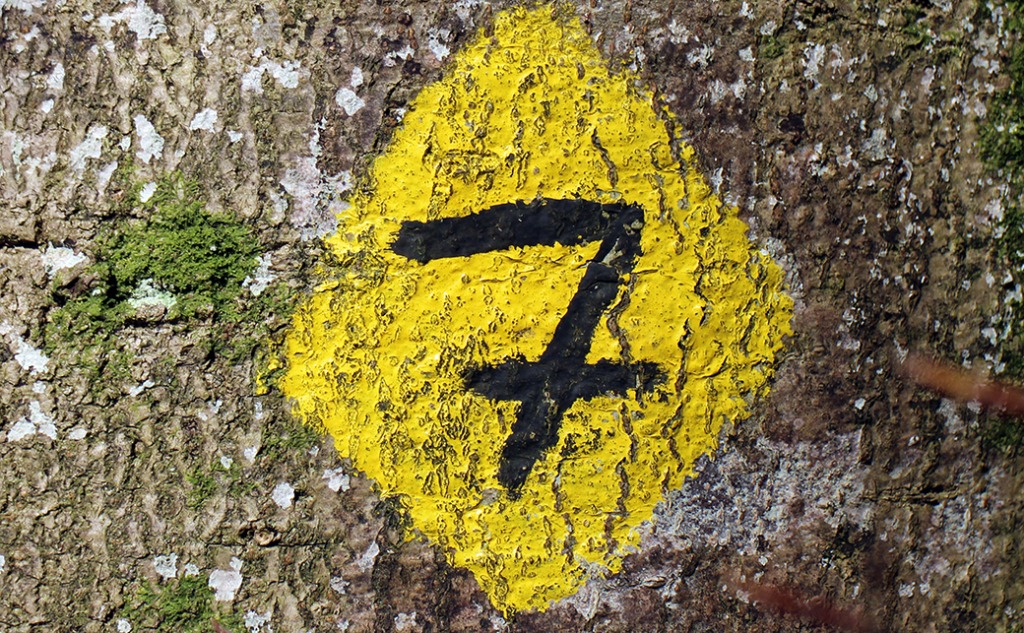 Rassie’s most Magical Number is the number 7

What is very important for you to know and remember is that Johan (Rassie) Erasmus has a Number 7 Personal Attainment Number [Born 05.11.1972; Birth DD = 5; Birth MM = 11; 5+11 = 16 = 1+6 = 7]. We recorded multiple times in our research writings that it was Rassie Erasmus’s 2019 Concentrated Number 7 Personal Attainment Experience (as revealed through our 365 Pin Code 4D Quadratic Predictive Year-on-Year Coding Model) which stood head and shoulders above all the rest. Such numerology events are extremely rare and when they do appear, they really mean business! Therefore, those few who really understand numbers and the predictive principles of applied numerology, will instantly know that from birth, 2019 was always coded to deliver an extreme experience for Erasmus; an event of the magnitude of his being the Head Coach who successfully leads the Springbok squad to winning RWC 2019, just as Kitch Christy and Jake White did in 1995 and 2007 respectively.

In the above lines of code for Rassie Erasmus we want you to please focus on the second column from the left which has the RED numbers. These represent Rassie’s Annual Experience Numbers. Note how the Red Number 7 (circled in bright green) for 2019 is sandwiched between the 9 (2018) and 11&2 (2020). This is what we Applied Numerologists call a Concentrated Experience because the number appears for only one year and is not “diluted” if you will, over a few years (see Rassie’s string of red 4’s from 2021 to 2023 as an example of experiential dilution). Rassie’s 2019 Annual Experience Number lines up perfectly (BOOM!) with his Number 7 Personal Attainment (also known as Sun Number); and that folks is the critically important clue which led us from the very start to predict that, contrary to what most rugby pundits believe (i.e. the All Blacks for the win!), he will successfully lead the Boks to the final and on to the win!

And then out of nowhere his “Final Pinnacle” Number pops out in November!

And to lock it all down, into a watertight conclusion, we analysed what Personal Month Rassie will be in, in November 2019. As you can see from the Green and Gold arrow in the chart below, November 2019 has the Number 3 (21//3) Energy flowing for him Personal Experience Wise and where does the Number 3 appear in his 365 Pin Code Numerology? As his Final Pinnacle Experience (see final chart below) which started in 2019! Game. Set. Match. Convergence of the highest order across the Board for Erasmus, numerology wise. Even though England demolished the All Blacks in their semi and are now being touted as the side who will lift the trophy, it is not they who will lift the Webb Ellis Cup because as per all our analytics, it is the Boks and Rassie Erasmus who will win RWC 2019 Final… Hope You Have Placed Your Bets! 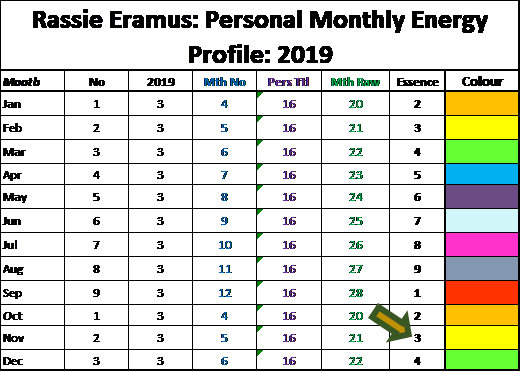 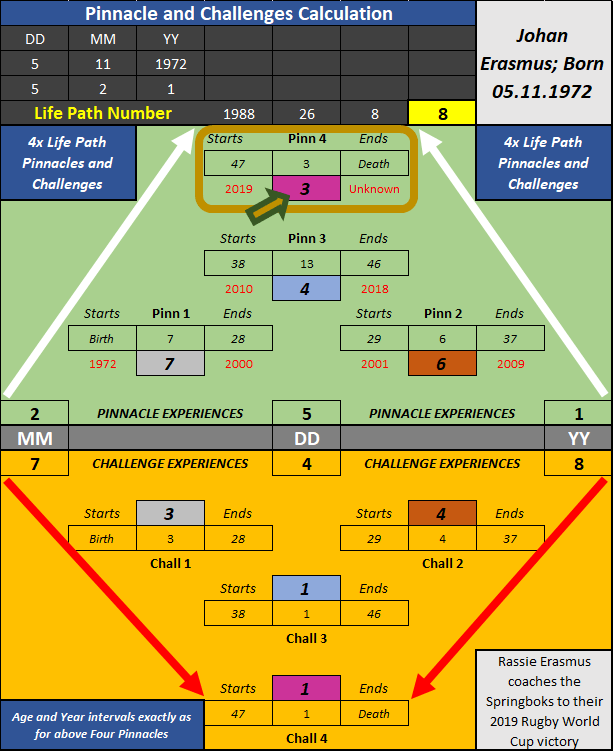 Note the Final Pinnacle Experience (Pinn 4) for Erasmus is defined by the Number 3 which is defined by creativity, communication, self-expression, joy, imagination etc. 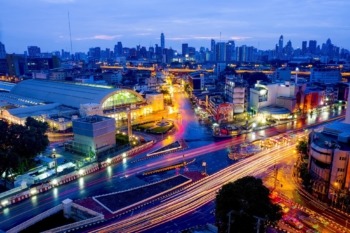